Imagination – Looking Back at One of our Faves 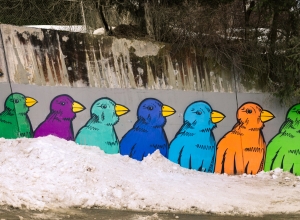 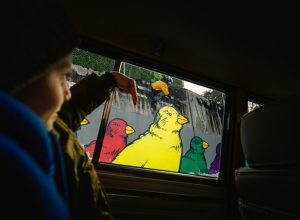 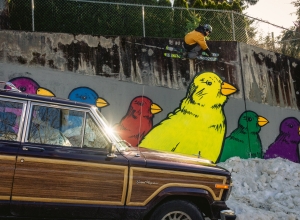 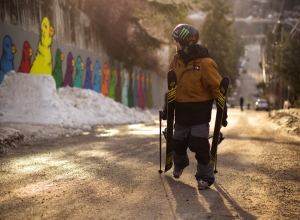 Our short film Imagination is, and always will be, one of our greatest accomplishments. To say that we worked hard on the project is a massive understatement, and the whole team is incredibly proud of the film.

Our main goal was to pay homage to JP Auclair, a game-changing skier, creative visionary and huge part of the Sherpas Cinema family. We lost JP in an avalanche a few years ago, and we’d like to think that fulfilling his vision for Imagination has helped his legacy endure. Of course the film wouldn’t have happened without The North Face’s Landon Basset, who also passed away recently.

“We have to thank JP and Landon for pulling strings from the heavens,” says Sherpas Cinema Director Dave Mossop. “None of this would not have happened without them. Also, a massive thanks to the whole The North Face and Sherpas family who brought it all to life.”

The short has racked up over 7 million views on Youtube, Vimeo and Facebook alone. And if you add up the numbers from Instagram and all of other social channels, the view count goes up by another couple million.

Imagination also went on to win several awards, including a Silver Lion for Creativity from the world-renowned Cannes Film Festival, Gold at The Clio Awards, Best of the Year Vimeo Staff Pick and Best Snowsports Film at The Banff Mountain Film Festival.

It’s been an absolute honour to receive such positive feedback on the global stage.  Unfortunately, we have to pull Imagination down due to licensing issues with the music, but we’re working to to bring it back to life as soon as possible.

In the meantime, you can watch the Behind the scenes here.

And you can read Kootenay Mountain Culture’s article about the film below.

Feel free to reach out to info@sherpascinema.com if you have any questions about the project. 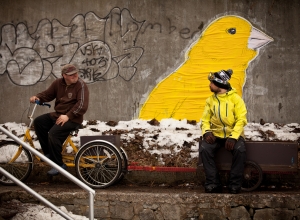 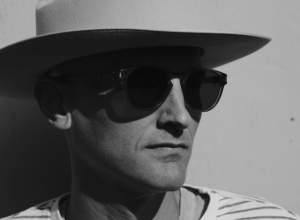 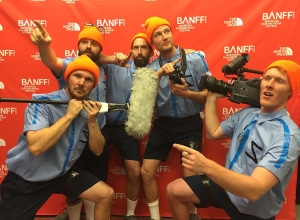 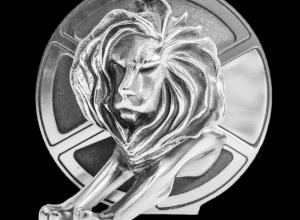 Imagination – Behind the Scenes on a Labour of Love

From Nike’s Uncle Drew to Jerry of the Day, the video short is a beacon of lucrative metrics in the internet’s marketing landscape. In that competitive market is a BC-based media house heralded for creating one of mountain culture’s most successful cinematic shorts. Now they’re trying to outdo, and out-view, in an effort to fulfill the last inspirations of a dear departed friend.

The wind cuts straight to the bone. It could not give two shits about our PrimaLoft® GORE-TEX® or long underwear. It just rips through it all with a quirky, edge-of-the-continent benevolence. Canada’s most eastern province, Newfoundland and Labrador, is starkly beautiful, but on a grey, mid-February, wind-blown day, not so comfortable. We’re standing in what’s known as the Battery, a small collection of pastel-painted homes affectionately called ‘Jellybean Row’, at the edge of the capital city St. John’s harbor. Eighty kilometre per hour winds scream in from the North Atlantic. At -13 C, it’s the definition of cold. I just want to get back in the car. So does Dave.

Sherpas Cinema director Dave Mossop and I are location scouting. You’re right to guess it’s not for a sun screen commercial. Mossop is the visionary behind the now infamous JP Auclair street skiing segment from the movie All.I.Can, a film shot entirely in the West Kootenay cities of Trail, Nelson and Rossland, wants to make a sequel to the segment. For reasons of geographical grandeur, he wants to do it here, through the declivitous streets of downtown St. John’s. The city sees an average of 335 centimetres of snow every winter, is quaint and charming, with a litany of steep streets, rails and stair sets, everything you need for a great urban ski segment.

But that wind. “A seal would lose her pups out here,” quips our location manager, back inside her idling Volvo, she herself wearing a sealskin jacket and matching hat. In the three days of scouting, the weather goes from -13 C and blowing sideways, to -6 C and 25 centimetres of fresh snow—blowing the other sideways, to +8 C and raining upside down.

We leave Newfoundland feeling nervous and excited. If we pull it off, the piece has major potential. If we don’t, well, we might soon learn why no one has done a high- profile, ski segment in St. John’s before.

The world of the internet video short is a gladiator pit. Views being the metaphorical kills. And views are the metrics the purse string holders, titled as marketing directors or executive producers, Not so long ago—even four or five years—all you needed was an original idea and good execution. The landscape was relatively unoccupied. Today, however, the game is entirely different. Thousands of sport oriented videos are uploaded every month—everything from genius Nike commercials featuring famous athletes, through to Jerry of the Day compilations with views well into the tens of millions. YouTube alone sees 300 hours of video uploaded every minute of every day. Standing out not only takes extremely strong creative, but more and more, you need big budgets.

Back in the spring of 2011, when Dave Mossop and JP Auclair filmed their Kootenay street skiing segment, they didn’t have a huge budget, and just the two of them as crew. Regardless, they managed to hit the sweet spot

—that perfect confluence of cinematography, story and action. The five-minute piece has well over two million views and, perhaps more that that, serious acclaim as one of the best action sports segments ever filmed. 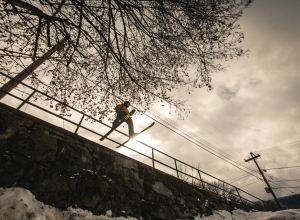 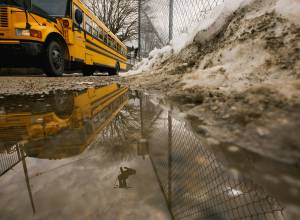 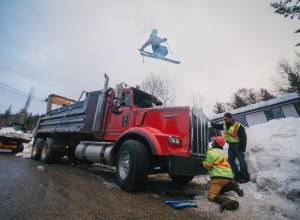 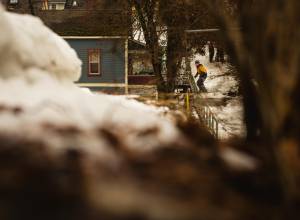 “It was basically just the two of us holed up in a Kootenay hotel for 3 weeks,” explains Mossop, who directed, shot and edited the segment. “We were experimenting with a new idea, one where we edited the segment as we shot it. We had the song and the concept, so during down time we would sit and edit temp placeholder shots on screen. But when it was perfect weather outside (grey and bleak) we went out to shoot those specific shot ideas. Each night we’d get home and drop those shots directly into our timeline, and by the final day we had a pretty decent edit on our hands.”

Sadly, JP Auclair passed away in an avalanche while skiing in Chile in 2014. The loss deeply affected the crew at Sherpas Cinema, who had worked closely with Auclair in the years leading up to his death. He was an innovative and creative skier, and a talented visual artist as well, and before his passing, he shared his idea for the sequel to the Kootenay street segment with Mossop. “What if you shot the whole segment from the perspective of a little kid in the back seat of a car?” Mossop recalls the initial light bulb conversation with Auclair. “What if the kid is pretending to ski with his fingers, like all of us did when we were younger—over cars, and in and out of ditches—and all of a sudden, a skier appears out of nowhere?” The two were jazzed. An idea worthy of its predecessor. 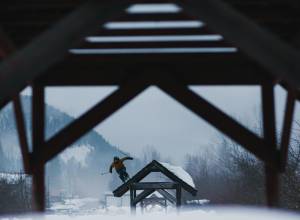 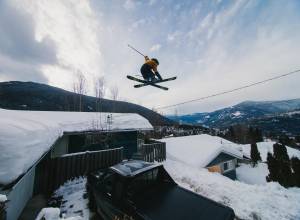 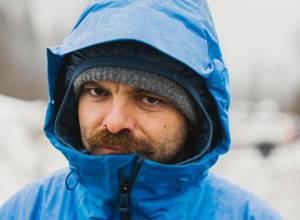 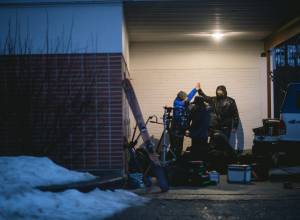 It’s the beginning of March and a crew of 12 cinematographers, producers, directors and athlete Tom Wallisch, a legendary urban skier, are about to embark on the trans-continental journey to St. John’s. As the supervising producer I’m beginning to freak out. Not for my lack of preparation: accommodation is booked, as are the flights, so is the $1,000/day mandatory stunt supervisor, and a slew of other big and small details. There’s a lot on the line creatively and financially.The next three weeks are a blur. Shooting an urban ski segment is a challenge in of itself. Shooting one from the perspective of a little boy in a moving car adds some intricacy. Tom Wallisch, who holds the world record for the longest rail slide, would be tested by long days and complicated builds, but would pull off a litany of ridiculous stunts, pleasing the many locals who would post up and watch for hours. The segment featured a local cast, which included Sequoia Colbeck, a nine-year-old boy with limited acting experience, and Lucas Meyers and Sydney Black, two well-known actors from Nelson. The piece was titled “Imagination.”

The crew survived monumental rain in Ymir, coordinated nearly 100 extras for the finale pull away shot at a Nelson school, convinced residents to let Wallisch jump on and off their roofs (including Ferraro Foods in Rossland), and at one point, were importing snow by the dump truck load as spring began to melt away the in-town canvas of white.

In keeping with the original line-edit process employed by Mossop and Auclair six years previous, and thanks to the all-hours work of Sherpas’ editor Tim Symes, who was posted up at his edit suite in the basement of Blaylocks Massion, every day we would see the piece come together, shot-by painstakingly-accrued-shot. The daily review became the critical fire that kept us pressing on. That, and the Woodford’s bourbon.

But amongst the wet feet and sore backs, the doing shots over and over and over again until they were just perfect, something quite beautiful happened. The true character of the West Kootenays came to the surface. Everywhere we went we experienced incredible support. From the police and the public works department, to local residents and local businesses. The City of Nelson let us paint a JP tribute mural on a concrete wall in Fairview, they allowed us to shut down major roads during prime business hours, even the Ministry of Transportation bent over backwards to accommodate our needs.

It seemed everyone had seen the original piece. We’d run into people on the street and they knew exactly what we were up to, each one inspired by this new story and the fact we were making a sequel to the original piece. It seemed our project’s maverick craziness (back-flipping driveways and pulling 720s off of carports is not your every-day, in city limits activity) clicked with what the Kootenays are all about. Freedom and art. 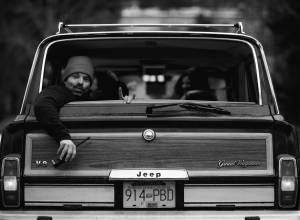 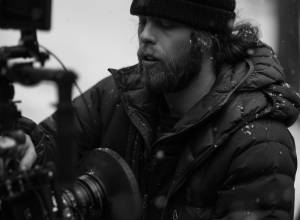 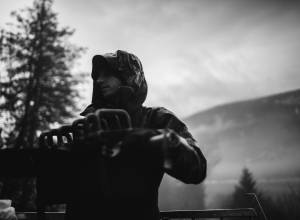 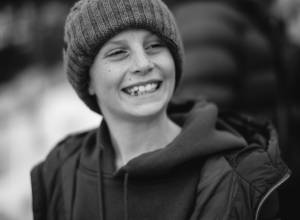 “Judging by the biblical weather that St. John’s received during our shoot dates, there is no question that shooting in Nelson was destiny,” continues Mossop. “The people of that community made this piece. In fact, I think it became an expression of Kootenay culture itself: helpful, kind, generous, fun, funny. They all came out of the woodwork to help us dig and clean up, and somehow they all knew of JP Auclair, even the 75-year-olds. It brings a tear to my eye to see firsthand the powerful and wonderful effect that JP left of this community.”

“There’s no way we could have pulled this off anywhere else in the world,” says Tom Wallisch from his home in Park City, Utah. “That place is special. It’s beautiful, for sure, you couldn’t find a more idyllic mountain town setting, but the people man. Wow, they’re special. 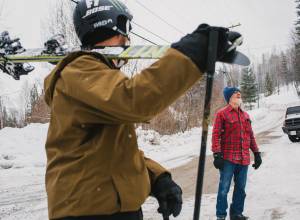 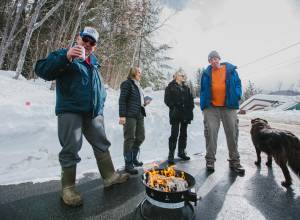 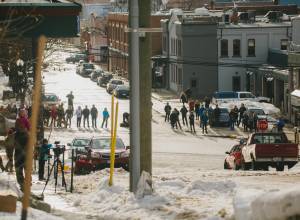 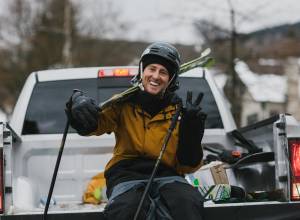