Mind the mess everyone, we’re trying to make a movie here.

If you’ve been on Whistler Blackcomb lately and you’ve seen gaggles of confused looking pros, stressed out filmmakers and unbelievably patient extras, it’s probably been us.

We’re currently filming the Inbounds section of Into the Mind and it’s been quite the process so far. We put an ad in the paper inviting riders of all ability levels to come participate in the process and we’ve been super pumped on the response. People have been amazing. Much gratitude to anyone who’s helped out in the last couple of days.

We’ve taken a different approach to this section. Every single person who rides Whistler Blackcomb rides it differently, and that’s what we’re trying to capture. It’s been really hard work, man. Not unlike herding squirrels. But we’ve actually been making some progress!

The casting call, on top of bringing out the intermediate shredders that we need to make this segment work, has also yielded a few new ringers. Julian Carr flew in from Utah and has been getting in on the action. He’s got the record for the world’s highest inverted cliff huck, so he’s an exciting chap to have around. Local snowboarder Joel Loverin has been coming out and spinning stylish 360s alongside Carr’s gigantic front-flips.

We also saw local shredder Stan Rey in the lift line the other day and asked him to come along for the afternoon. When the cameras started rolling, he decided to drop jaws with a casual backflip off a 40-foot cliff.

That was on our first day of real shooting which, given our ludicrous sets of logistics, went surprisingly well. Stan’s backflip was the centre point of the day’s second heavily orchestrated shot. While he did his thing, 11 other athletes did theirs and six extras did theirs. 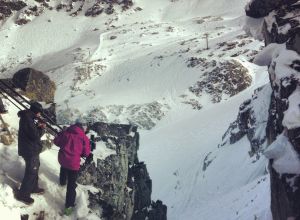 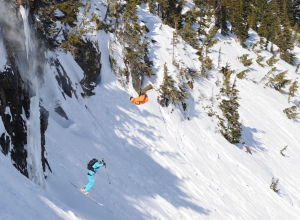 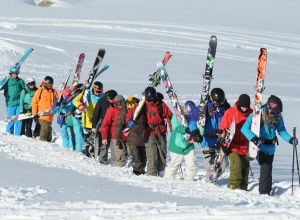 Choreographed ski scenes, man. You’d think it would be enough to do old Dave Mossop’s head in, but everyone’s been coming together to turn these seemingly impossible shots into reality.

Again, gratitude to anyone who’s been helping along the way.

We’ve been staging these shots all over Whistler Blackcomb for the last few days, trying to find areas that stack up in such a way that we can capture as many different elements as possible. Maybe you saw us on The Waterfall off Whistler’s Peak Chair, or maybe you saw the 18 bombholes we left in our wake.

If you were on the Blackcomb Glacier on Sunday morning, you may have seen a train of shredders throw themselves off the iconic windlip while a posse of strategically placed big mountain riders made their marks on the chunk of gnarly terrain in the background.

This has been the nature of our shooting life of late. It’s all part of the master plan for Into the Mind, but for now, we’ll just let you guess how it’s all going to fit together.

We’ll be working hard on this segment for the next couple weeks, so if you see us posted up somewhere on Whistler Blackcomb, swing by and say hello. We may even ask you to be in a shot or two.

This shoot, like the ski hill we’re doing it on, is for everyone.