Deep in the forest with Urban Cone

A few weeks back, Sherpas Cinema had the great honour of hosting and hanging with a young band from Stockholm, Sweden.

Urban Cone and the good folks from their label, Universal Music, teamed up with The Sherpas to shoot a video for their new song Black Ocean, spending an action packed week in the Sea to Sky corridor working hard and taking it all in.

Starting in the studio in Vancouver and eventually marching into the rainforests of Squamish, the shoot was an awesome success and tons of fun.  The band absolutely crushed it during our brief shoot window, hopping right off the plane into the studio and then enduring seemingly endless takes in the classic cool ‘n damp Squamish forests.  Actor and pro skier Austin Ross came in to bat clean up, rounding out the story for the video. What a machine! Truly a jack of all trades.

Amongst all the hard work, the crew still managed to squeeze a live gig at The World Ski and Snowboard Festival, some late season shreds at Whistler Blackcomb, countless amazing meals, a jam sesh with Sherpas members at our headquarters and a fierce Ender Ender party for TWSSF 2012 and our video wrap that we all felt for days.  Thanks Urban Cone and Universal Music! It was a blast! 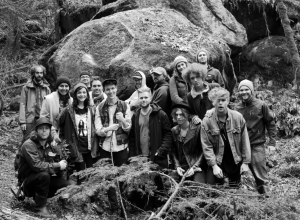